We’re deep into summer, the sun’s out in full force, and we’re all looking for fun ways to beat the heat and have fun with our friends. As any veteran of a backyard bro summer hangout will know, your options for activities mainly come down to two: beers or sports.

These two tend to go hand in hand, and our Dollarama Discovery item has found a way to bring them even closer together. 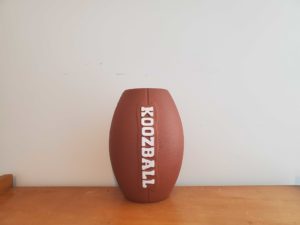 So, is it a football? Is it a beer kozy? Well, my simple friend, you are in for a surprise. By its own description, “The Koozball features an internal aerodynamic propulsion device for maximum throwing accuracy and distance. It also stabilizes your icy-cold beverage in the optimum drinking position.” Uh, could I get that in normal dude terms, please??

Thanks, Koozball. So, as you can see, the Koozball is in fact TWO things. That’s a dollar per thing. Can’t beat that value. And the value isn’t all you’re getting. As both a football and a kozy, the Koozball performs. Light and aerodynamic, the Koozball is a great substitute for an actual football, and its foam exterior makes it easy to catch, so stubbing your fingers on the ball is a thing of the past for your more uncoordinated friends. It especially shines as a kozy, adding a satisfying bulk to your drink, and its size makes sure you’ll always be able to find it if you set it down and walk away. One side effect of the added bulk is that it makes it feel like there’s still beer in your can even when it’s empty, which comes as a disappointing realization at first, but the feeling leaves you thirsty for another beer, which is always a good thing.

Unfortunately, these two functionalities don’t mix. Several warnings all over the packaging and the Koozball tell you that you should not throw the Koozball with a beer inside it, and this is incredibly disappointing. When I purchased the Koozball, I was vividly picturing loading it up with an ice cold PBR and throwing a tight spiral across my backyard to a thirsty friend. Sadly, in its current design it really is unsafe to even try something like that. The hole in the kozy isn’t tight enough around the beer to keep it stable, and the image of a beer can flying at you face, even while wrapped in the protective foam of the koozball, isn’t one that conjures safety. Not to mention how shaken-up the beer would be after being thrown like that. So, as tempting as it may be to launch lager filled hail marys to your buddies, the technology just isn’t there yet.

The koozball acts as a great compliment to any hangout involving dudes and brews, but its limitations keep it from being a true game changer in the summer fun arena. For this, we give the Koozball six OBJ one-handed catches out of ten. 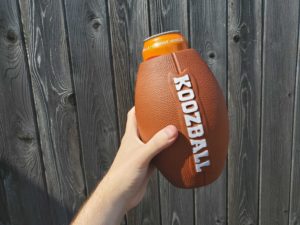 Do you have difficulty choosing between holding your baby or your phone? Do you struggle with tending to your overflowing…
Learn More >

We’re deep into summer, the sun’s out in full force, and we’re all looking for fun ways to beat the…
Learn More >

At the dawn of the last decade, a few Silicon Valley companies came together with a crazy idea: “What if…
Learn More >

Universal Adjustable Neck Mount. Wow, that’s a mouthful.
KOOZBALL
COVID VS Creativity
The Death Knell has Rung for the Jingle. Here’s why.